I didn’t think I could be more angry with the system that is supposed to assist the elderly to live in the own homes.  I have previously been reduced to anger, rage, crying, shouting  and swearing (not usually all at once, happily), but having tested me in the past, this time THEY HAVE GONE TOO FAR.  AND I AM RAGE TYPING.  Which is really not good for anyone, especially me, and for readers who have to put up with my typographical errors as I rage type.

When I last wrote, it was a humorous take on the fact that some people thought Dad had died.  After the last couple of conversations with My Aged Care and ACAT, I am fairly confident some bureaucrats hope he does, if for no other reason it will stop me calling them. And their cunning plan to reduce the number of people on the waiting list for home care packages (currently sitting at over 120,000 dear old souls).

Dad has now been on a waiting list for a level 3 Home Care package for more than 12 months.  At 96 and seven months, he is classed as ‘medium’ priority – this assessment was done more than 12 months ago, and as I have written before, it’s not like he is Benjamin Button, getting better with age.  The assessment is more than 12 months old and a lot can happen in that time.  And it has – apart from the usual decline in mobility that comes with age.

Dad recovered from sepsis recently – how, we don’t quite understand; he is a medical miracle – and had a week in hospital and two weeks in rehabilitation.  He was allowed home on condition that he had someone help him in and out of the shower, as his shower has a step in it, and his balance has deteriorated.  This is a serious cost in addition to the domestic assistance already in place.  We have a small amount accrued in his home care package from the time dad used to be able to travel on holidays with us (those days are gone), and we are eating into that on a weekly basis already.

At the same time, I was on the phone to ACAT and My Aged Care about trying to escalate the level 3 home care package funding – and the merry go round started again, with less than cheerful music.  Every now and then the merry go round flings me off, face first into a brick wall, and I lie, stunned momentarily, before getting up, and getting back on. 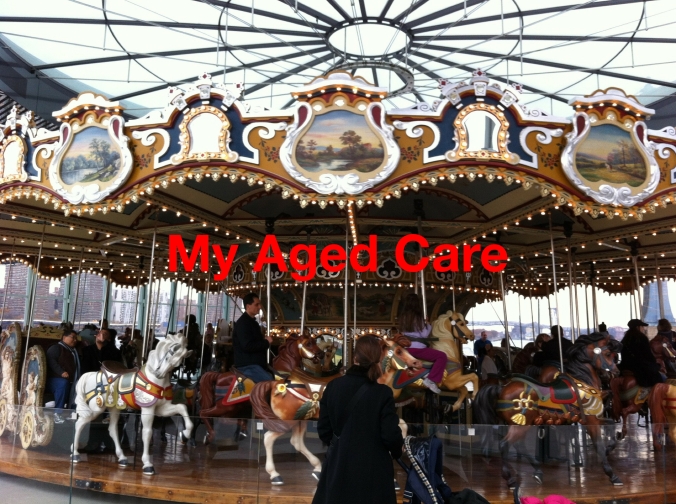 ACAT helpfully provided a referral for a meal delivery service – I have been cooking dad’s meals for eight years now and it is time to stop, for my own sanity.

My dear sister spent hours researching various meal delivery services (including some listed on the MAC website – so helpful of them!) and kept getting mixed messages.  If only Dad was under NDIS things would be so much simpler.  In the end, she discovered that the ONLY option for meal delivery is Meals on Wheels (Meals on Wheels helpfully told her this) and the referral given to us from ACAT was, in fact,  useless as it was for CHSP funding and Dad has a home care package, and that has to be used up first.  Then I am on the phone again, trying to find out WTF is going on.  Yes!  It’s true – even though I explained his home care package was going to actually run out of money in a short space of time, and we need it to fund his personal care, we have to wait for that to actually happen, for any change in PRIORITY.  There would still be a wait for the package itself.  Meanwhile time marches on…

My penultimate call to MAC was so frustrating, I find it hard to describe.  I may have shouted.   At one point, I asked if my suicide and therefore lack family support would escalate dad up the priority list and the gormless bureaucrat on the phone said ‘yes’, without pausing.   Seriously.  She said yes.  So I asked to speak to a supervisor, and couldn’t, but she did fill in some sort of form for me, with a reference number and said someone would call me.  *rollsaboutlaughingknowingthiswon’thappen.

Meanwhile Dear Old Dad is being released from rehab.  His brother is coming to visit from the UK and he made it home in time.  Hurrah.  That afternoon I had a phone call from MAC.  I thought it was in relation to the idiot bureaucrat I had spoken to earlier that day.  But no.  It was just to tell me that the referral sent to MAC for some minor bathroom modifications from the occupational therapist at the hospital can’t be used because it is from the wrong bucket (or should that be pail) of money – CHSP funding again – and I have to get his home care provider to arrange this.  At full freight cost plus no doubt a fee for service for them.  WTF?

HOW USELESS IS THIS SYSTEM?????   Two referrals in as many days for services we can’t use. Hours researching and on the phone. The OT said that unfortunately, one dad had left hospital she couldn’t make any changes or speak to MAC about it at all.  I still don’t know what the bathroom modifications are and no one has followed up to see if it has been done.  People tick a box under this system then wipe their hands.

So, the latest is that to get his priority escalated, there has to be a crisis, and having that small amount if money, which week by week reduces, does not a crisis make.  I, and his home care provider, have provided documentary evidence (including hospital reports and spreadsheets) to show that the current cost of his care on an annual basis falls short of his level 2 home care package by $12,000.  But this is not enough of a crisis  – perhaps if we can’t afford the assistance in the bathroom, and dad has a fall and breaks a hip that will be crisis enough?  Of course this will probably kill him.

Shouldn’t the system be set up to prevent a crisis?  Isn’t that what true caring ABOUT people means, leaving aside caring FOR them.

From a ‘consumer’ perspective My Aged Care is simply woeful.  Not one of the many people to whom I have spoken has ever said ‘let me have a look into this and try and find a solution’.  Tick a box, hang up.  Tick a box, hang up.  It is so complicated and time-consuming the government has recently invented a navigation tool to assist people work it out. More money wasted on bureaucrats instead of helping those who need it.

The business strategy for My Aged Care seems to be the following:

They are doing so well at this – not so well at caring for our elderly.