For those playing along at home, we left off at XYZCare, coming out to see Dear Old Dad to ‘assess’ him in relation to his need to have his ulcer wound dressings changed on a daily basis.

A couple of catastrophes followed the ulcer scenario.

Two weeks before Christmas Dad had a minor car accident. Thankfully with a wall. Fortunately, no one was hurt (and it could have been much worse) but having thought about it, that was the event that made Dad decide to give up driving. He had resisted gentle entreaties, and was loath to give up his independence but we assured him that we would put things in place to make sure he could get around.  And he got around a lot for a 94-year-old.  So transport became an issue.

Then, in the early hours of Boxing Day he had a fall and broke his wrist. The emergency room staff sent him home with me and my sister (who was visiting with her family at the time)  with some tape he could use to tape a rubbish bag on his arm (his right arm of course) when showering.  My sister and I exchanged knowing glances, but she helped Dad every day get the bag on to his arm.

Dad was coming away on holidays to the beach with us, so he had company,  people to play cards with, my sister to flog at scrabble,  and also people to drive him around and assist with the showering process, as well as the wound dressing. It is not very dignified to have your daughter help you getting into the shower but manage we did. Thank goodness for my sister’s presence, help, patience and willingness to be flogged at scrabble every day.

Having his right arm in a cast did not interfere with his ability to enjoy the beach and a glass of champagne with his daughters, and, fot the most part, did not dim his glorious smile. 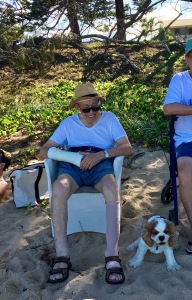 My sister and her husband took him back to Brisbane with them and they extended their stay in Brisbane until we got home from our holiday, as we did not want him to be on his own.

On Monday, 3 January 2017, while I was still at the beach, and as planned, I thought I would make a quick call to add assistance with showering to the ulcer wound dressing.

On that day, there were a total of 20 phone calls between me, My aged Care, XYZCare and the ‘assessment’ team they used, recorded on my phone.

You see, supervising or assisting with a shower is not a nursing duty. The nurse that was coming daily was not allowed to do that. And because this was a ‘new thing’ (the broken wrist), XYZCare needed to do a new support plan to put in place the sending a different person to assist with showering. Even though the ulcer wound needed to be dressed immediately after showering.  Wearily I pointed out, several times, the sheer lunacy of this situation, and the added stress for Dad (and me) trying to make sure it was all done correctly and with a minimum amount of time and fuss.

However we never got there – the twenty telephone calls included a necessary call (actually about three calls) to My Aged Care to get a new referral. And to have it marked urgent. This was sent to XYZCare head office. It then had to be sent to the local office for them to implement (as per the initial request mentioned in the earlier blog post).   Literally  – 20 phone calls to and from various agencies involved in aged care and I am still waiting for a return phone call from XYZCare as to how this could be implemented. I waved the white flag, purchased a special waterproof sleeve on the internet that Dad could manage to put on himself, and hoped, that with my help, he could manage and not fall before the nurse came.  But one very kind nurse ‘took longer’ than she needed with Dad and ‘accidentally’ was there at the time Dad needed to take his shower, on the days she was rostered on.  Bless her for that small act of compassion and kindness.

Honestly, I would have started taking calm down pills if only I could have unclenched my teeth.

I have previously mentioned Yes, Minister, and I cannot help but wonder at the number of people employed in the behemoth of the aged care industry, to fill in endless forms and the  cost to the pubic purse. How much better could the money be spent on the actual people who need it?

“The public”,  said Sir Humphrey,  “do not know anything about wasting public money. We are the experts”